What Really Happened in Vegas?

UPDATE 12.29.18: As we predicted, new statements from Las Vegas police officers indicate that Paddock had been dead for a long time before SWAT entered the room and he wasn't alone!
"So I go in there. Um, and I could see the suspect laying on the ground and the blood had started to coagulate by his head. You know, when I looked at him I immediately thought to myself this guy has been dead for more than the time we've been in this room."
He was a patsy! And he wasn't alone!
"Um, as they walk into the room, mind you on the radio there's a million other active shooters being called out in all these other hotels. They put the second charge on the door. Um, they blow the door. As soon as that I hear the second explosion now the fire alarm goes off again and I hear the (unintelligible). I hear the what sound like a burst fire but it was very muffled. So it sounded like two or three rounds went off. And I'm - I'm down there I'm trying to make my way through the room I'm like, okay, I was like, "Did the suspect shoot at us? Did we shoot the suspect, are we in a gunfight, what's going on," and they were all pretty calm. So they all seemed a little bit like embarrassed. And I guess one of - O'Donnell or one of them had a negligent or accidental discharge I don't know what the proper term would be.”
https://www.lauraloomer.us/blog/exclusive-new-vegas-shooting-sergeant-statement-challenges-lvmpd-single-shooter-narrative?fbclid=IwAR3V4cAst6iPFJ2k88tuUMbKW3nakhbLH3SsYR0eKLD98O-AEsuU5l0vYlA
UPDATE: New video shows Las Vegas police stood outside Paddock's room for five minutes doing nothing while the shooting was going on and waited another 41 minutes to breach the room. https://twitter.com/SalHernandez/status/1012216788329721856
BREAKING: Here's the best theory ever:
There was a King Fasal who had a son, Prince Alwaleed bin Talal. King Fasal took ill and named his brother Salman as king in his place. King Salman has named his son as heir to the throne, instead of his brother’s son Prince Al Waleed. Al Waleed is a Wahabbi. Salman is Sunni. Wahabbi is extreme Islam. Salman wanted a more modern, non-extreme Islam for Saudi. That’s why he named his own son as heir. Prince Alwaleed hates Trump. Trump calls Alwaleed a spoiled brat who uses his daddy's money to control nations.
In Las Vegas, Prince Al Waleed owned the upper floors of the Mandalay Bay resort, including the 32nd floor that was one of the points of shooting at the strip. The Mandalay Bay has a heli-pad on the roof. That is important, because that was the escape route after the carnage. Paddock was a pilot. He was also a gun runner between the Philippines and the US. He was running guns for Prince Al Waleed. He didn’t win at the casino. Those millions came from smuggling.
On the night of the attack, King Salman was in Las Vegas. Salman was at the Tropicana. Paddock was victim one. He was a patsy. Dead before the first shots were fired. Others were used to shoot at the country music venue. That was to create chaos and distract from the real target over at the Tropicana. Al Waleed’s assassins shot from Mandalay bay, but they also were at the Tropicana trying to kill Salman. That explains why there were shooters on the ground as well as in the air. Remember the videos of the helicopter fly over? It wasn't the police or media helicopters. It was the assassins who ran up the stairs to the roof from the 32nd floor. Remember they sealed the door to the stairwell?
Meanwhile the assassination attempt on Salman failed. After the attack, Jared Kushner flew quietly to Saudi Arabia and Prince Alwaleed was arrested and his funds seized. It was not only an assassination attempt and a terror attack, but an attempted coup in Saudi.
BREAKING: Recent documents released regarding the October 1, 2017 Las Vegas shooting show that three women were staying in Paddock's room. Also that Paddock's girlfriend, Marilou Danley, whose fingerprints were found on ammunition in the room, and who eyewitnesses place in Vegas at the time of the shooting, not the Phillipines as she claims, has ties to ISIS.
On the night of the Las Vegas shooting, police knew that Danley had followers on Facebook who showed ISIS “beheading videos” on their Facebook pages. Immediately following the Las Vegas shooting, ISIS claimed responsibility, yet the media has discounted that. Additional suspects or people of interest remain at large. 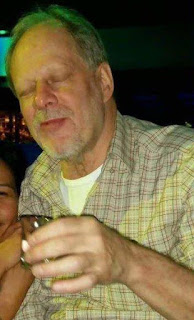